Revue Prevue Party with Dandy Wellington and His Band 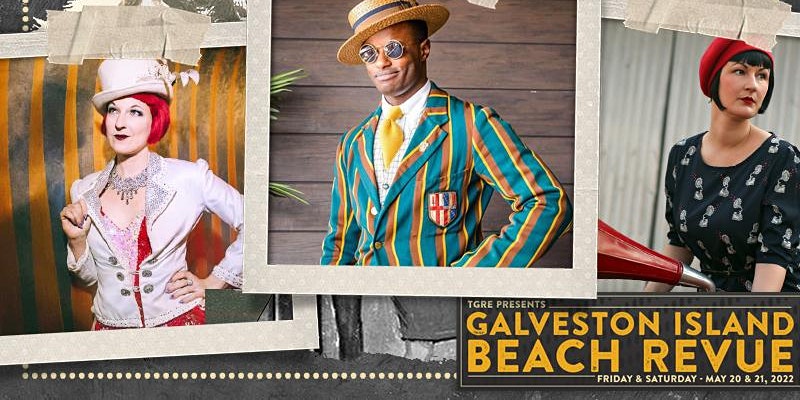 Meet the 2021 Bathing Beauties at this Exclusive Preview Party!
Galveston’s official kick-off to summer welcomes you to the 2021 Galveston Island Beach Revue at the exclusive Revue Prevue party, hosted by Dandy Wellington and His Band! Enjoy complimentary drinks while meeting the 2021 Bathing Beauties while Dandy dazzles with his impeccable style and performance. Food trucks will be on-site for paid food options.

Galveston’s official kick-off to summer welcomes you to the 2022 Galveston Island Beach Revue at the exclusive Revue Prevue party, hosted by Dandy Wellington and His Band! The night also welcomes Amelia Foxtrot and Gin Minsky for special Friday-night-only performances. Food trucks will be on site for paid food options.

Ticket holders will enjoy complimentary craft beer and wine and will receive a drink ticket for one complimentary cocktail from DTO Galveston. The evening also is the public’s first introduction to the 2022 Bathing Beauties contestants.

Tickets are non-refundable and include standing-room-only admission to Saturday’s Beach Revue.

ABOUT DANDY WELLINGTON | Inspired by the Big Band Era of Jazz, Dandy Wellington, and his Band have taken the sounds of the 1930s and 40s and created a world of well-dressed music. With a passion for obscure songs steeped in the Jazz tradition, Dandy Wellington has assembled a catalog of music that invokes an atmosphere of class. From the golden age of cinema to the bounce of New Orleans, each song is hand-selected and played to perfection by a band cut from the cloth of elegance. This year marks the sixth year of Dandy’s participation at the Galveston Island Beach Revue. Learn more at www.dandywellington.com.