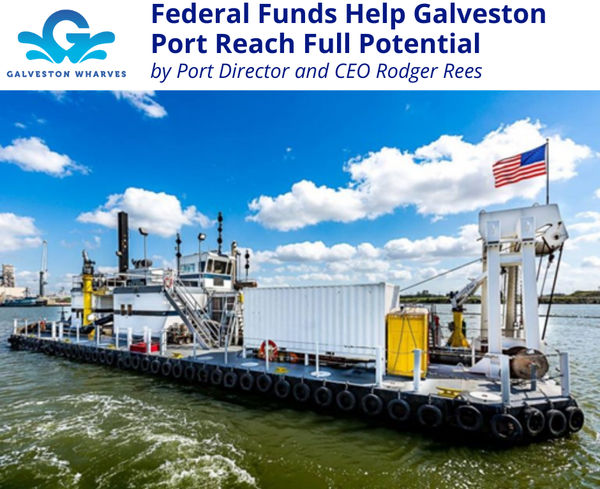 Rodger Rees, the Galveston Wharves Port Director and CEO has announced that for the first time in decades, the Port of Galveston will be able to reach its full economic and commercial potential as a deep-water port.

The recently passed Infrastructure Investment and Jobs Act (IIJA) includes substantial funding for dredging to extend and maintain the federal Galveston Ship Channel to its permitted depth of 46 feet.

This federal commitment is a gamechanger for the Galveston Wharves, its tenants and private operators on the channel.

According to the U.S. Army Corps of Engineers, the agency responsible for maintaining federal portions for the channel, the IIJA Appropriations Law will provide an estimated $11 million in federal funding for dredging. In addition to federally funded maintenance, the Galveston Wharves spends more than $1 million annually to maintain depths along is berths.

This federal project will extend the 46-foot depths to the end of the Galveston Ship Channel, allowing vessels calling on privately operated terminals along the final 2,500 feet of the channel to access the permitted depths.

The federal budget also includes $25 million for 2023 maintenance. This would be the largest maintenance funding ever allocated for the Galveston Ship Channel, which is ranked among the top 50 U.S. waterways based on cargo tonnage.

This channel extension and maintenance project will increase cargo activity, strengthen the port’s competitiveness, create more and better jobs, improve operational safety, and reduce emissions. The deepened channel will be able to accommodate larger vessels, which is important as ships continue to increase in size.

We’ve been working on this for a long time. The project was designed, engineered and approved in 2016, but has been pending federal funding. Having a shovel-ready project means that it can proceed without delay.

Planned for 2023, the joint project of the Corps and the Galveston Wharves has an estimated total cost of $12 million to $14 million. As the project’s non-federal sponsor, the Wharves participated in project planning and will contribute a portion of project costs.

Winning the funding was a team effort. We greatly appreciate the support of U.S. Congressman Randy Weber and other elected officials, the U.S. Army Corps of Engineers, the Galveston Regional Chamber of Commerce, Texas International Terminals, and other operators on the channel.

Even before the funding announcement, the Corps began maintenance dredging for the first time in more than a decade. The Corps is also enhancing the Pelican Island levee system with an additional capacity of 2 million cubic yards to accommodate additional dredge material.