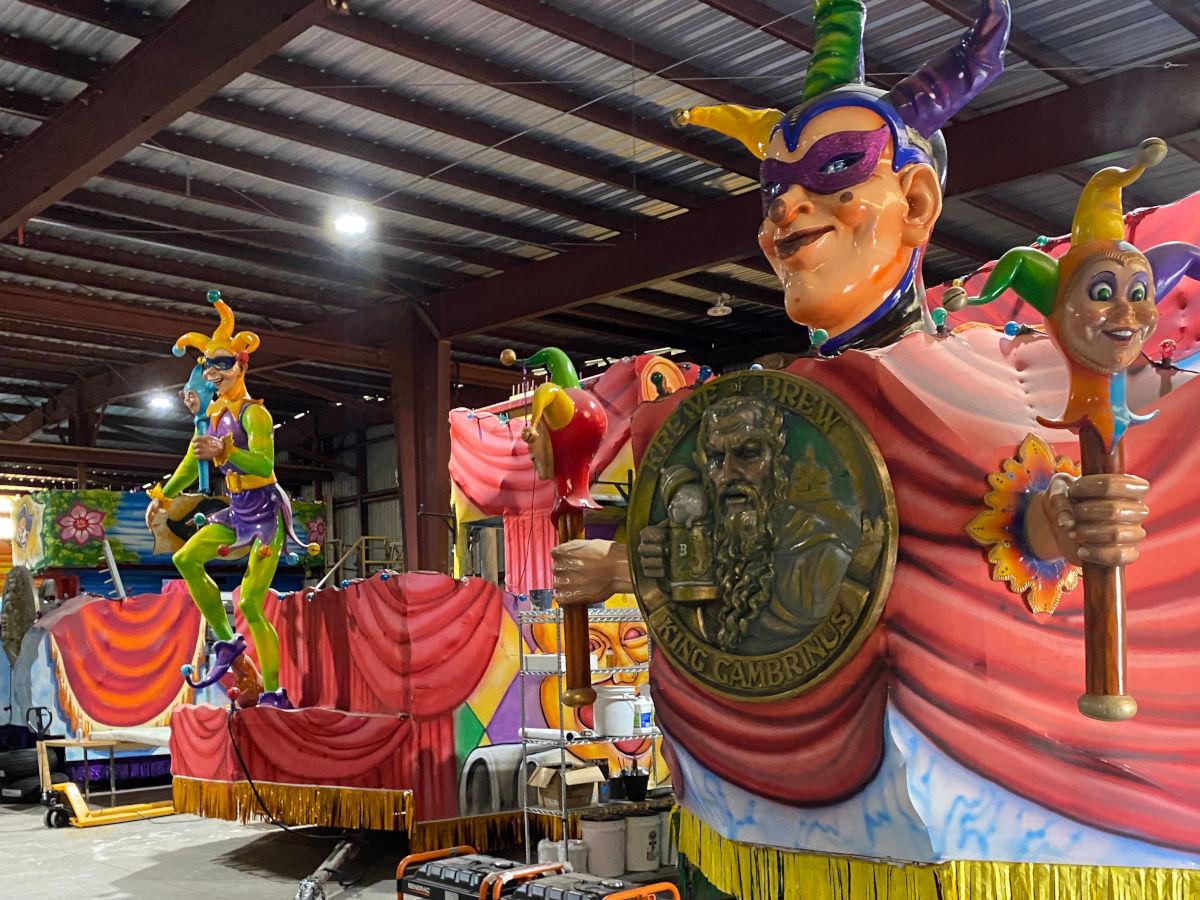 People who do not live in a Mardi Gras town may never understand those who do. It is not merely another parade or festival. In Galveston, it is part of the islander identity. Throw-beads (especially the good ones) are a permanent fixture of living room décor. Real Christmas trees are no longer purchased, not for the environment (added bonus), but because they have to be redecorated in green, gold, and purple and last until March.

Since Mardi Gras is such an important part of Galveston, the spirit of Galveston should be well-represented in the public celebrations. This is the argument that permeates larger controversies such as the opposition to a gated festival. To some locals, it does not seem very “Galveston-like” to allow a private company to charge admission onto a public street for what is supposed to be a community-led festival while simultaneously robbing the businesses on that street of revenue.

But other defining aspects of Galveston Mardi Gras that are not controversial in the least still deserve the same approach, and under the radar, one Galveston Krewe has remedied a long-held, glaring oversight in the production of the festival. Even though recent additions of the Golf Cart Parade and the Jeep Parade helped to infuse local flavor into the public celebrations, local influence has been notably absent from the major parades.

Until 2020, when the Knights of Momus made a seemingly obvious decision that was in fact a huge step towards ensuring that Galveston’s Mardi Gras celebrations are not a New Orleans knock-off but a distinct reflection of the island’s uniqueness. The Krewe that is island-famous for its high-profile members including Tilman Fertitta and the late George P. Mitchell, became the first Galveston Krewe to employ local Galveston artists to design, construct, and paint their floats for their Grand Night Parade.

A substantial community of artists has resided in Galveston for decades, and in the last ten years, the Arts have become a well-known, integral aspect of the downtown cityscape. Visual arts have made a distinct impression in that time, with a proliferation of art galleries on almost every street of downtown.

Despite this, for decades the creation of Mardi Gras parade floats has been entirely outsourced, primarily to artists from New Orleans according to local artist and float builder Katie Embesi. This year for the second time (Mardi Gras 2021 was cancelled), the stunning talents of Galveston’s own will be on display in one of Galveston’s grandest parades.

Although it is not the longest parade (that honor belongs to the Mystic Krewe of Aquarius and Krewe of Gambrinus parades), the Grand Night Parade is considered a “must see.” It typically draws one of the largest audiences since it travels the length of 25th Street (outside the gated area) and holds a prime-time slot—6pm on the second Saturday of Mardi Gras! Galveston. The parade also has a different theme each year and features premiere “throws” and trinkets in addition to an avalanche of beads, some of which are custom made to reflect the theme.

Thus, it is the perfect platform to display Galveston’s unique flare and introduce revelers to the spectacular talent of Galveston artists. Most importantly, the Knights of Momus has brilliantly evolved their long, storied legacy into something incredibly relevant to today’s local identity and festival, and their prominence is poised to lead the way for all parades to become a blank canvas for local brushes.

This year’s theme for the Grand Night Parade is “Midnight in Paris,” an apt foundation for any artist to draw inspiration, but especially for local artist Catherine Stroud. Among her many artistic accomplishments and adventures were several years spent studying art in France. This year, in a volunteer effort coordinated by local non-profit SMART Family Literacy, Catherine donated her time and talents to direct the production of a float entitled “The Champs-Élysées.”

A single viewing of Catherine Stroud’s trademark style renders it unmistakable, regardless of whether it is seen inside Elizabeth Punches Studio & Gallery (410 23rd Street), upon one of the massive murals she has produced around town and in buildings all the way up the I-45 corridor, or on a Mardi Gras float. Her surreal lines and proportions lend themselves brilliantly to her mesmerizing use of color, both of which can only be adequately compared to one of her inspirations, Henri Matisse. But while most artists can easily emulate a style with practice, Catherine Stroud captured the heart of Matisse and eloped, making it her very own. 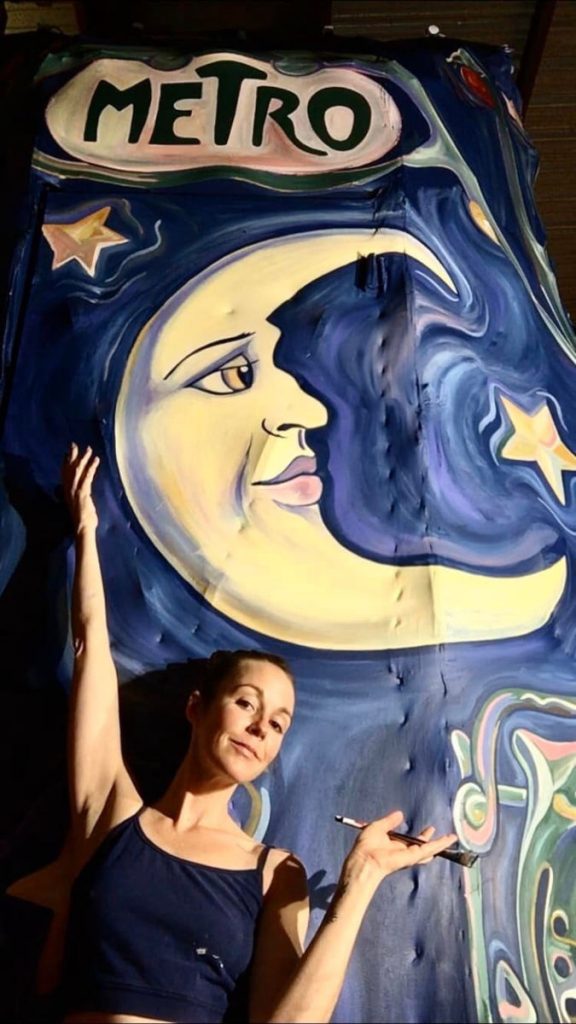 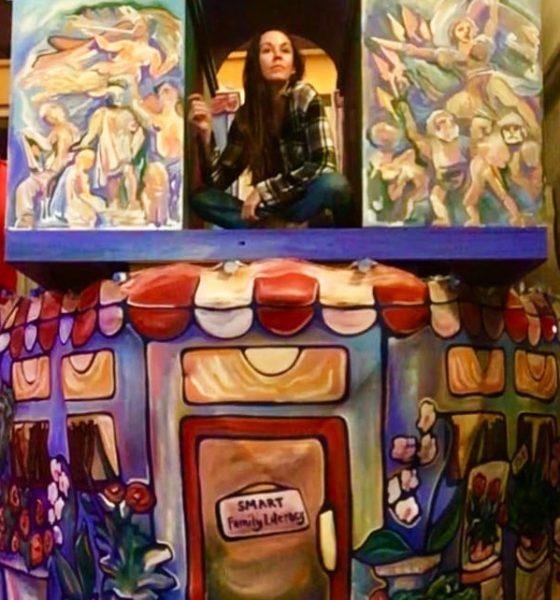 In 2020, Catherine produced a number of memorable floats for Momus’ Scandinavian-themed parade, but her Parisian street-themed work this year combines her talents with an obvious affection. “It has all of the typical, kind of cliché aspects of a French street,” she explains. It features a bakery, chocolate shop, a Metro entrance, mask-wearing Parisians sipping wine at a sidewalk table, and of course, a bookshop in keeping with the float’s sponsor. “And since the theme is ‘Midnight in Paris,’ I wanted it to have that woozy, after-dark feel, which is kind of my style anyway,” she laughs.

“Families, students, college students, and professionals joined us to help in the painting process,” Catherine continues. The icon (the large, sometimes mechanically animated structure at the front of a parade float) was built by Jim Turner to resemble the Arc de Triomphe, one of Paris’ most famous monuments that appropriately sits at the western foot of the real Champs-Élysées.

Derek Anderson is another local artist who will be represented at this year’s parade. His float called “Out of the Louvre” features re-creations of famous works by renown French artists Henri Matisse and Pablo Picasso, with a little Van Gogh added in because, “he’s not French but he counts,” Stroud assures.

Derek Anderson Studio located at 2224 Church Street has been a fixture on the Galveston arts scene for several years. Originally from the northern area of Wisconsin, Derek is a self-taught artist who studied art while traveling extensively through European cities including Paris, Budapest, Hamburg, and Amsterdam. Not one to limit his creative mediums, Derek creates through oils, pastels, acrylics, and “any means available,” thus the float project was a natural extension of his quest for new expressions. 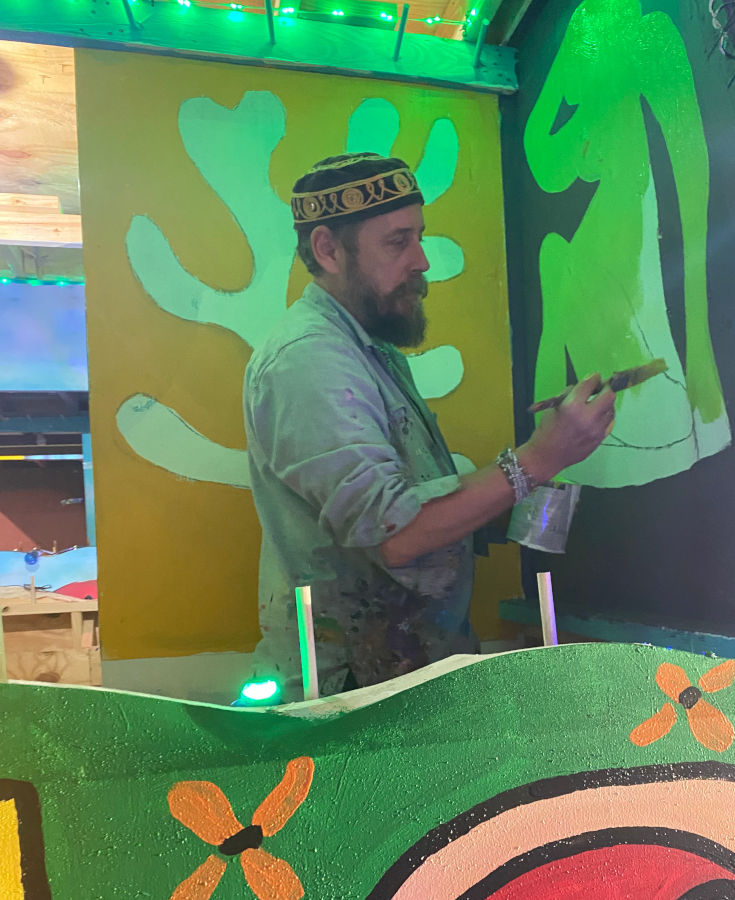 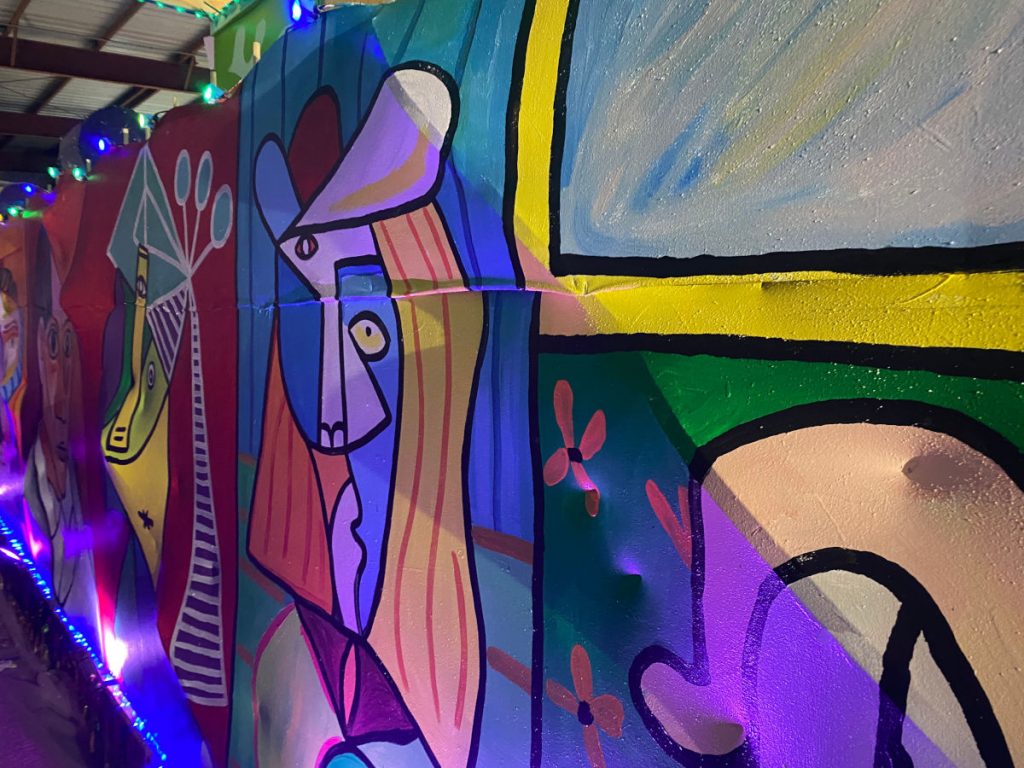 Katie Embesi is also a self-taught artist who coordinated the efforts at the “float barn” this year and created several of the concepts. The “Moulin Rouge” will have a high-kicking can-can girl as its icon. “Let them Eat Cake!” is a tribute to the much-maligned Marie Antoinette. “The float depicts her famous (but now rebutted) statement,” Katie explains, “with the float decorated as a cake and the icon, Marie’s head on a plate with a fallen crown to her side.”

Katie worked for several years as a retail buyer for the Galveston Historical Foundation before deciding to take a chance on herself and pursue an artistic career. “It took a while for the parachute to open as I did small jobs here and there until I found my niche,” she remembers. “Mardi Gras floats have been the most rewarding yet. I have been able to use my entire skillset—woodworking, sculpting, lighting, and painting.” 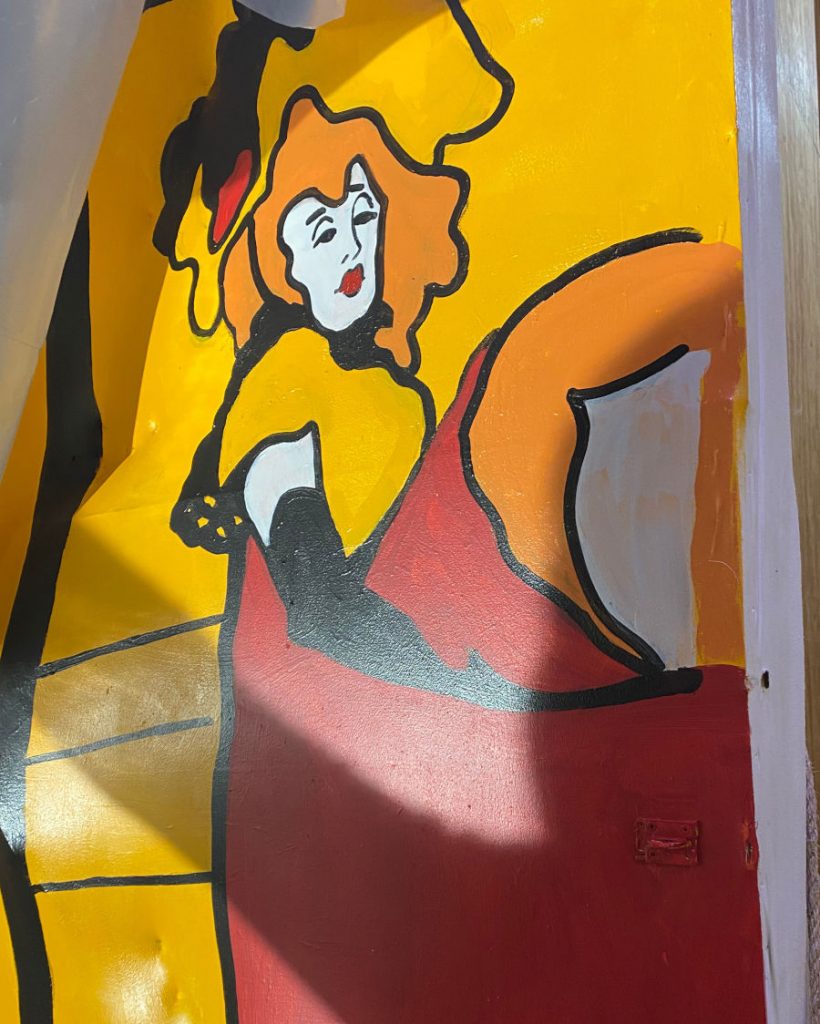 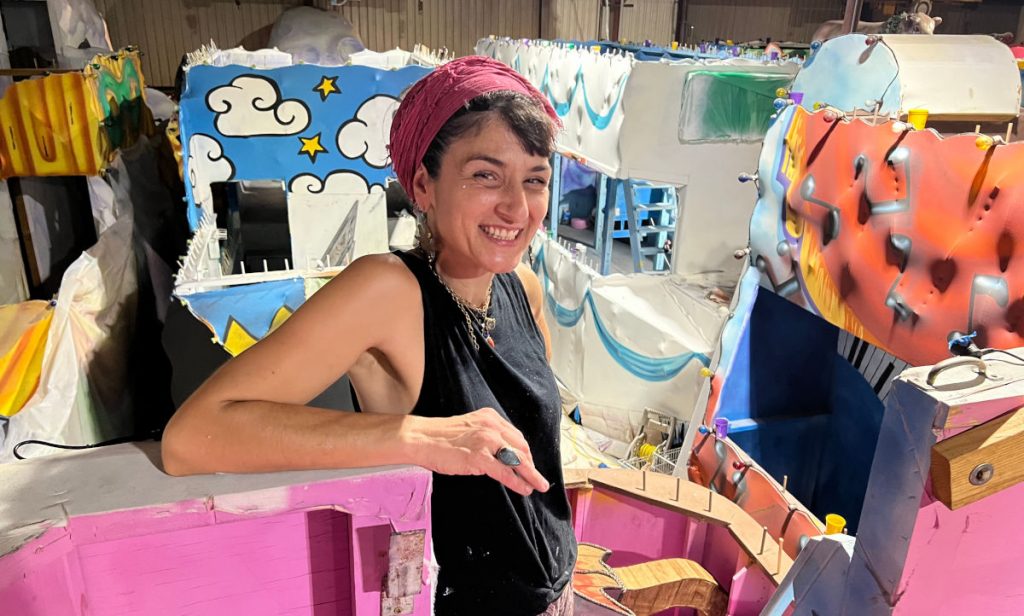 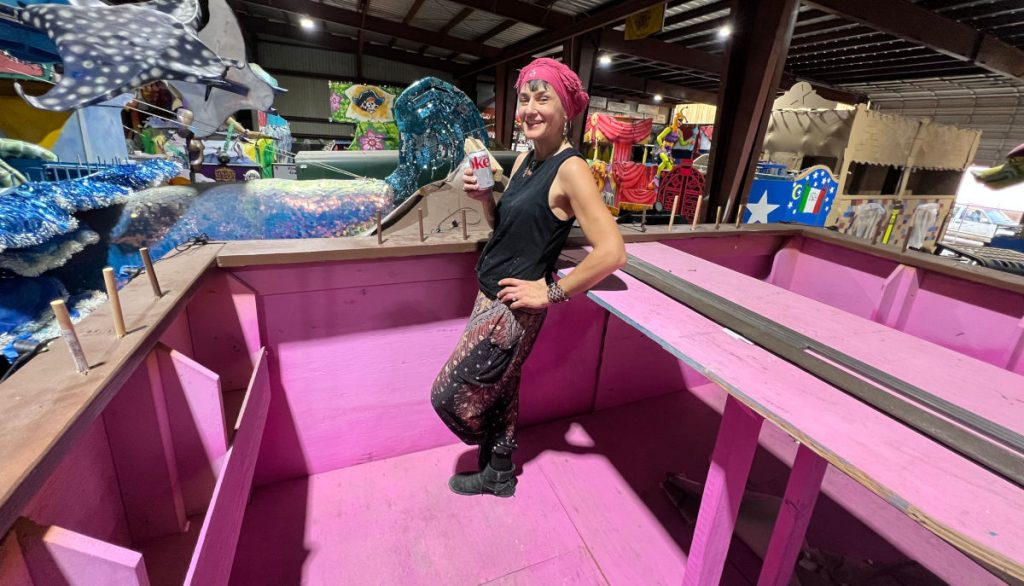 Her other concepts include “The Eiffel Tower” which depicts the adjacent Pont Alexandre III bridge, and “The Catacombs of Paris” which was completed by local artist Lee Brooks. Katie was assisted by her daughter Scarlet and local artist Timothy Jeans. Additionally, Katie has converted a Viking ship from last year’s theme into a tall ship of France, and since the floats change every year, she has suggested that some panels be preserved for posterity and possibly sold as a fundraiser. 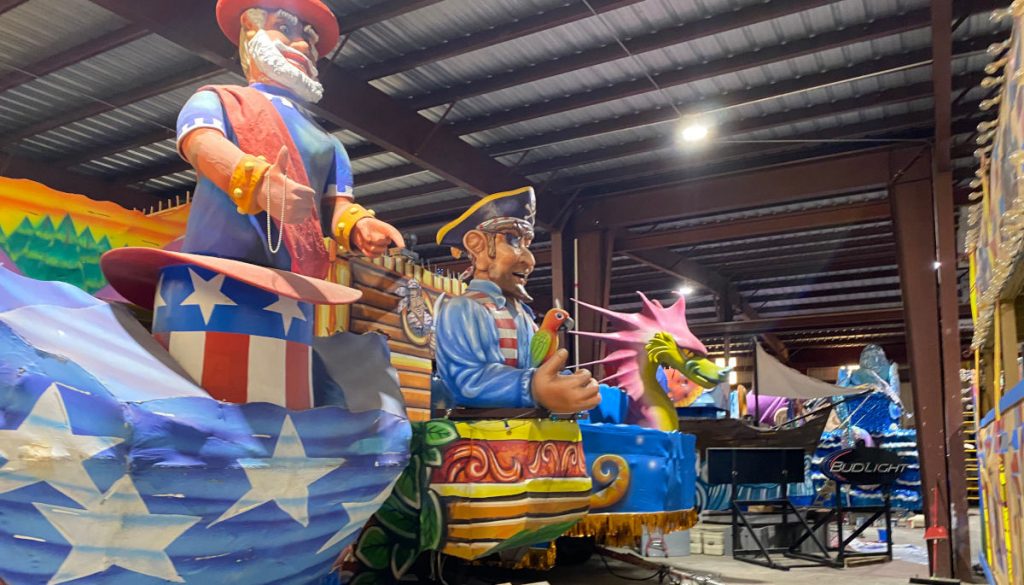 Together, this crew of local artists is redefining the essence of Galveston Mardi Gras, and the Knights of Momus will bring them centerstage during the Grand Night Parade “Midnight in Paris” on February 26 at 6pm. The parade starts at 23rd and Seawall Boulevard, travels west for two blocks to 25th Street, runs north up 25th Street to downtown, and finishes by circling the Mardi Gras Entertainment District (gated area).