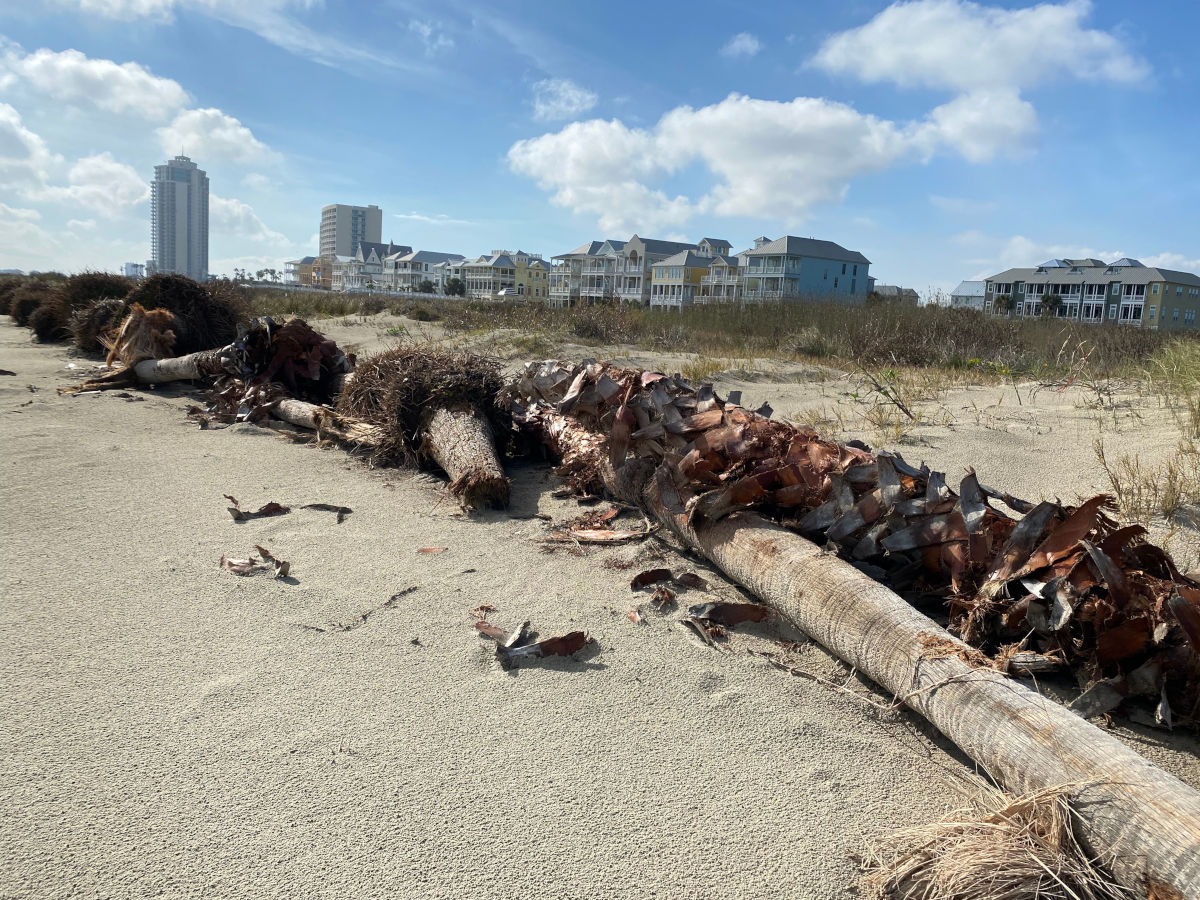 Palm trees—the definitive symbol of tropical paradise. Regardless of the shape, size, or species, the mere sight of them on the horizon stirs a beach lover’s soul more than the smell of suntan lotion.

This is precisely why islanders (and all tree-lovers) found it devastating to watch these magnificent trees suffer in the aftermath of 2021’s Snowpocalypse. Some were killed instantly during the three days of winter madness that left Texans just as frozen as Mother Nature. Others had a fighting chance, but they were cut back too soon and died slowly. The shock of a chainsaw while in such a delicate state was no help, but more importantly, expired fronds serve as a stabilizing foundation for the new growth. Though they may be unsightly, removing those fronds too soon after such significant damage can severely diminish a palm tree’s ability to regrow.

Particularly visible were the palms along the 61st Street corridor that had no defense from the wind. They stood for months, crippled, dead, or dying until they were recently removed. Fortunately, resiliency and reinvention are Galveston trademarks, and apparently, Galveston’s palm trees are just as tenacious and crafty as its people.

The island and its stoic community have not only repeatedly overcome natural disasters and economic ruin but also rebounded to new heights as a result of these travesties. And in a small but deeply thoughtful and meaningful gesture that stands as a testament to that resiliency, palm trees lost to the 2021 freeze are now being used to reinforce a portion of the dunes on East Beach.

Over the course of several years prior to 2020, the critical mass of dunes that stretches between Stewart Beach and the west entrance to East Beach (next to the free public lot at the end of Appfel Road) were steadily accreting. This stretch provides the first (and only) line of defense to the developed beachfront area located in front of the seawall that includes the Beachtown and Preserve at Grand Beach subdivisions as well as Palisade Palms and The Islander condominiums.

By 2018, these dunes had grown to an extent that they were encroaching onto the established driving lane for emergency and city vehicles, marked by two parallel rows of white pylons that run along the dunes’ southern (beachside) edge. By the next year, nature had completely defied this manmade boundary, and the dunes were so large that the “road” was no longer passable. Unfortunately, the next two years brought events that halted this growth and nearly flattened the dunes in several places.

On March 15, 2020, as the world stood on the brink of a widespread shelter-in-place order, a fire erupted on the far eastern tip of Galveston’s shoreline and tore westward through the undeveloped area between Seawall Boulevard, Boddecker Road, and Appfel Road, narrowly missing the East End Lagoon Nature Preserve. Flocks of birds exploded up from the brush amid billows of smoke, and coyotes were seen running from the flames.

The loss of natural habitat was devastating for wildlife, but fortunately, no human lives were lost, and no manmade structures were burned. The cause of the fire was impossible to determine, but thanks to the valiant efforts of the Galveston Fire Department, who was greatly assisted by area departments from Santa Fe, Jamaica Beach, Dickinson, Hitchcock, and Texas City, the fire was stopped well short of the residential areas, and only a portion of the shoreline dunes east of Beachtown caught fire. But in that stretch, all the brush, grasses, and reeds were scorched. These elements are critical to helping sand accumulate and are therefore crucial in the growth of dunes.

Then Hurricane Nicholas hit on September 14, 2021. Although it was only a Category 1 storm and its only real casualties in town were fences, dunes are on the front lines of any major weather event, no matter if it is proportionately mild. Unlike the effects of fire, rising water does not have as much of an impact on the brush, but even a low surge, if it is sustained, is enough to stir up the sand on the dunes and eventually carry much of it back out to sea.

As a consequence of these two events, late 2021 saw this entire strip of dunes recede far back behind the white posts yet again, and a large portion was completely flattened. However, in contradiction of the old adage, “two wrongs don’t make a right,” the once decrepit palm trees along 61st Street and throughout the city have found new life.

In the last months of 2021, they were removed and placed end-to-end in a line that runs north of and parallel to the driving path, extending from the parking lot at the end of Appfel Road to the far western edge of Beachtown. This strategic placement will serve both as a “sand catcher” to help the dunes accrete more quickly and as a “dam” of sorts to encourage their vertical growth as opposed to horizontal.

The dune’s directional growth is important not only because taller dunes provide more protection against higher surges but also because that driving path is essential. The city and Park Board should be commended for leaving the dunes alone as they grew over the driving path in previous years. However, driving on the beach is one of the fastest ways to damage it and cause unnecessary erosion. Having a designated area for city and emergency vehicles is a necessary preventative.

Practicality aside, this simple gesture was a heartwarming testament to the importance of nature in the Galveston community. It is a much more fitting end for those majestic trees who in a sense have returned home, and it was a monumental step in the continuing restoration and preservation of the island’s coastline.

How You Can Help Preserve Galveston Dunes

Since dunes are so crucial to coastal existence, a number of studies and experiments have been conducted in an attempt to fortify dune systems. Fences have been tried, but they only work in certain cases and in most others, they impede the movement of wildlife. Bulldozing sand to make new dunes has been attempted as well, but a mere heap of sand lacks the intricacy of sediment layering that happens with natural accumulation, and it simply does not work.

In other words, nature is the best architect, and the absolute best thing you can do to help the beaches and dunes is to leave them alone. This is what that looks like: