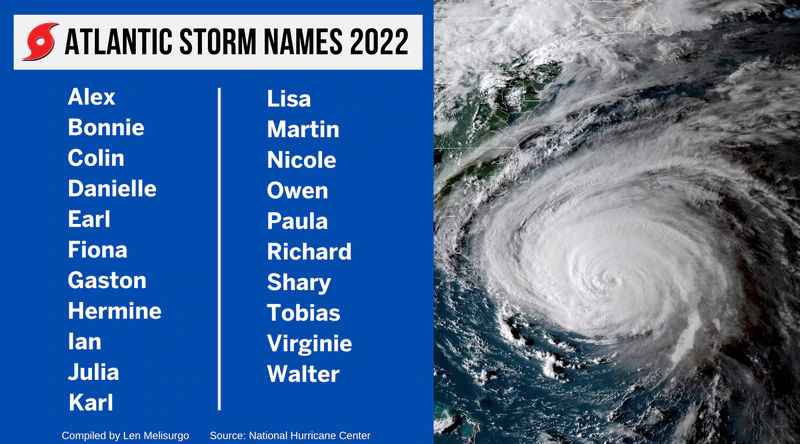 Where do hurricane names come from?

Meterologist via the U.S. National Hurricane Center started the practice of naming storms in the early 1950s. They discovered it was an easy way to reference storms when discussing them before and after landfall.

In 1953, to avoid the repetitive use of names, the National Weather Service revised their internal naming system to give storms female names. This practice was based on the traditional naval practice of naming ships at sea with female names. In the late 1970s they revised the system to incorporate both female and male names for hurricanes.

Here are the hurricane names for 2022

Atlantic hurricane names (season runs from June 1 to November 30) are:

How does a storm get a name?

Hurricanes start out as tropical storms, but not all storms become hurricanes. So how does a storm get named?

Tropical storms get a name when they display a rotating pattern, and the wind speeds reach at least 39 miles per hour (63 kilometers per hour).

A tropical storm develops into a hurricane if the wind speeds increase to higher than 74 mph (119 kilometers per hour).

The World Meteorological Organization decides which names are removed from the list if the storm brings extremely damaging hurricanes. The effects could be for legal, cultural and historical reasons.

In Galveston on the gulf coast, our tropical storms and hurricanes are generated off the Atlantic coast, very often cross into the Caribbean and gain momentum before moving into the gulf region. That being so, our season is consider the “Atlantic” hurricane season.

The Atlantic hurricane season for 2022 officially starts June 1 and extends through November 30.

On May 24, 2022, the National Oceanic Atmospheric Climate Prediction Center (NOAA) released the hurricane season outlook for this year. They’re predicting an above-average season for the seventh-consecutive year, with 14 to 21 named storms. They predict that six to ten of those will become hurricanes, and that there should be between three to six major hurricanes with winds 111 mph (179 kph) or higher.

The most important part of hurricane season is taking responsibility in being prepared. You simply cannot wait until a storm is on the way, that is usually too late and you’ll find that most supplies are already gone. You should have an evacuation plan, supplies, and important documents ready to go long before a storm is named.

Related Topics:JuneThis Month
Up Next