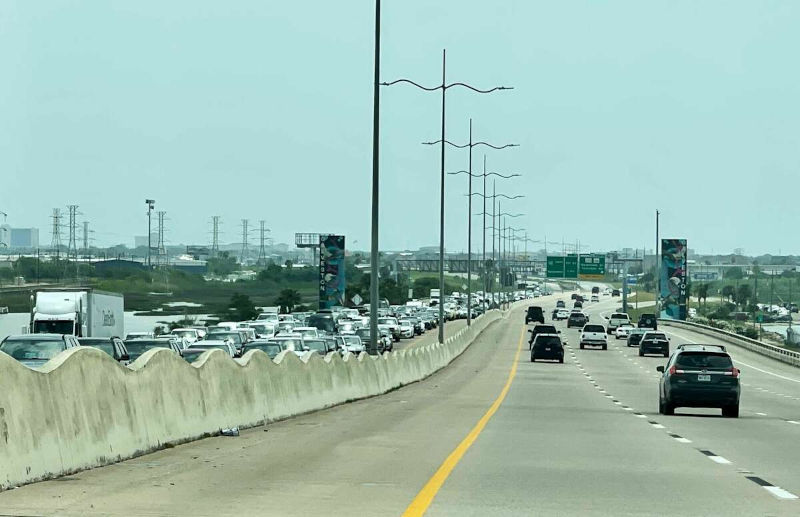 Most of us are accustomed to Interstate 45 being under some type of construction within Galveston County, which causes increased traffic and travel delays. However, emergency work on a failing bridge caused major chaos and confusion over the weekend, particularly on Saturday.

Initially these repairs were part of an overall scheduled construction project already announced by TxDOT. However, an inspection revealed damage that needed immediate attention. This part of the project was moved ahead because it is affecting the transportation by trucks departing the Galveston port.

TxDOT is currently limiting vehicles over the maximum legal weight of 80,000 pounds to pass over the I-45 northbound bridge at the BNSF rail line just north of Tiki Island and Galveston Island in Galveston County. This specific bridge was scheduled for demolition and reconstruction as part of a complete reconstruction of I-45 in this area.

Update: May 12
TxDOT has created several construction-related lane and ramp closures affecting access to Galveston Island during peak traffic periods. This week, UTMB Health and other regional officials met with the Texas Department of Transportation to get a better understanding of these essential construction projects and their impact.

Update: May 14
As of 10am this morning, TxDOT has not announced any weekend lane closures. However, there is a lot of talk and wondering among locals as well as those who planned to visit the island this weekend.

Take a look at this page to get current updates about lane closures and construction related delays. The closures affect incoming and outbound traffic so be sure to check the resources before you leave. There are NO exits on these closures so you will be stuck in the slow down, if it exists. We’ve listed all available resources to check traffic conditions before you travel. Take extra water and be sure to fill up your gas tank just in case.

This is a two-year project to replace two highway bridges (the “Santa Fe” bridges) on IH-45, east of Tiki Island and just north of the Galveston Causeway.

The northbound bridge is in critical condition and will be demolished first, to begin a year-long rebuilding process. The demolition and reconstruction of the second bridge will follow.

As the first bridge is prepared for demolition, all traffic on IH-45 will be concentrated to five lanes: two lanes headed southbound (toward island) and three headed northbound.

All five lanes of traffic will be moved to what is currently the southbound bridge of the Galveston Causeway, starting at about Harborside Drive, and routed over the remaining Santa Fe bridge.

The area affected by this work will stretch about 3 miles, and then northbound traffic will be moved back to its own side of the interstate. The main project will begin in 4 to 5 weeks.

TxDOT is working on strategies to alleviate impact on motorists, and UTMB officials are also actively reviewing plans and exploring options across all entities to help address the issue of island access and traffic bottlenecks.

A map will be released soon by TxDOT with additional project details (all still subject to revision), and we will share once available.

A series of construction-related lane and ramp closures are affecting portions of Interstate Highway 45 in southern Galveston County, and periodically affecting access to Galveston Island. This week, local officials will be meeting with the Texas Department of Transportation to get a better understanding of these projects and their impact.