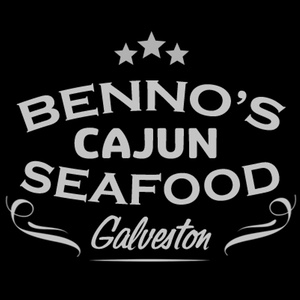 Also known as Benno’s On the Beach, this casual seawall restaurant offers cajun style seafood with a great view of the gulf. When the weather is right, you’ll want to sit outside at the wooden picnic table, catch the salty breeze, enjoy your favorite beverage, and watch the pelicans fly over the waves.

Benno Deltz opened this restaurant in 1983 after spending years as the manager of Gaido’s Seafood Restaurant, a popular local place down the street. His goal was to operate with a cajun flair and offer a more casual atmosphere.

Since then, not much has changed. Benno’s is still a favorite of many and still has it down on cajun style seafood in a laid back environment.

Fresh is the name of the game in Galveston, and Benno’s seafood is no exception. Inside you’ll find walk up window ordering and while the menu is fairly simple there is plenty to choose from including shrimp, oysters, gumbo, pasta and more served up fries, seasoned potatoes and garlic bread.

These are homestyle recipes made with fresh food. The shrimp come from the gulf right across the street, while the crab and oysters are right out of Galveston bay.

Benno’s is the Texas Gulf Coast at it’s finest with a cajun-style seafood fix.

The simple blue brick building is unmistakable with picnic tables inside and out. You’ll almost always hear Cajun music on the speakers, and the menu is right on the wall.

It doesn’t get simpler, and simple rarely tastes this good!

Benno’s is known for its crawfish, the season running from the beginning of the year until about the middle of June. Don’t miss the boiled crabs, grilled oysters, and flounder.

Save some room for dessert because customers race about the homemade bread pudding. If you don’t have room for it, get it to go for later. Customers have been known to drive from Houston just to have a piece.

“If you’re looking for some hearty Cajun food on the island for a great price, look no further!”

“The food was so delicious! My boyfriend and I split a fried shrimp plate along with some garlic bread that we added on and it was the perfect amount for us…”

“They have outdoor seating that faces the beach.”

“I mean, don’t pass up this place! It is delish and the helpings are plentiful! Always a fan favorite!!”

“We came back for our 5 year wedding anniversary… And this is always the place we go first. The best fried oysters. And the new potatoes are awesome too. My favorites are the side of hush puppies. You have to stop here if you love oysters and hush puppies!”

We’ve gathered a full list of more seafood restaurants in Galveston . Another favorite local seafood place is Galveston’s own BLVD Seafood is a favorite of both locals and visitors.