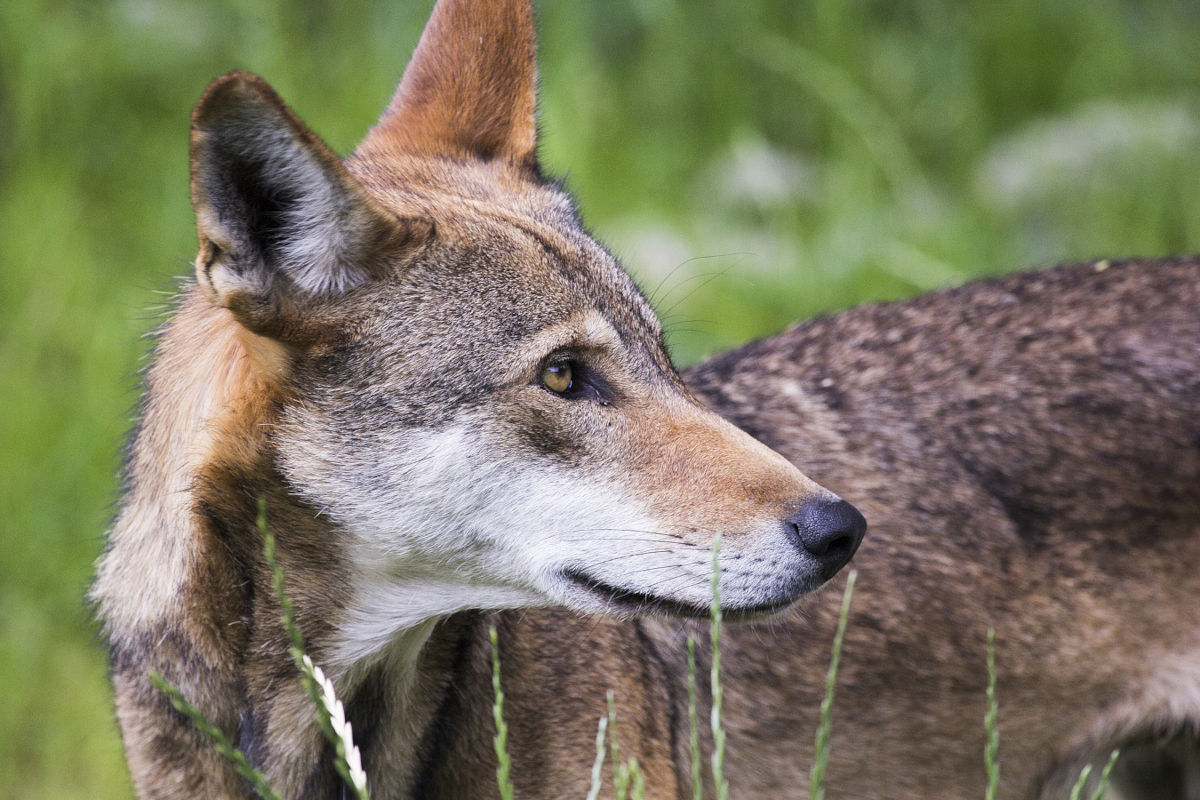 Galveston Coyotes—why they are important, and why they should be left alone.

Despite the myriad of intriguing characteristics that could land Galveston in the national spotlight, it seems oddly appropriate that a rather unlikely piece of island lore recently made it into the New York Times—our coyotes. Until recently, the coyotes that roam large portions of the island—both developed and undeveloped—were only considered legendary to locals. Like hurricanes, coyotes come with the territory. They are an accepted part of this daring, up-close-and-personal-with-nature world called Island Life. As a result, these things do not frighten. They captivate.

Galveston’s regard and respect for coyotes is inspired by their mystical presence, commanding silhouette, and their ability to evolve alongside and thrive amid human development. Now, thanks to local resident, photographer, and former fisheries biologist Ron Wooten, the world is a little wiser to these enchanting predators with whom we willingly cohabitate, but for an even more incredible reason: Galveston coyotes are genetically linked to and the last known direct descendants of the wild red wolves that once populated the Gulf Coast en masse.

Red Wolves once roamed the entire southeastern and south-central U.S. until aggressive predator control and the destruction of their habitats sent their number plummeting in the mid-20th Century. By the late 1960s, only a handful of packs remained on the Gulf Coast of Texas and Louisiana.

In an effort to stave off extinction, U.S. Fish & Wildlife (USFW) began to capture the remaining red wolves and initiated a captive breeding program at Point Defiance Zoo in 1974. They were moved to Bulls Island off the coast of South Carolina in 1978, shortly after which the red wolf was declared extinct in the wild. Sixty-three wolves were released into the wild between 1987-1994 and the population grew steadily until 2012 when lack of oversight caused the numbers to fall yet again. Peaking at an estimated 120, only 14 remained in South Carolina as of 2019.

Nearly thirty years after the declaration of their extinction, Ron Wooten’s story begins tragically in 2008, when his dog died after being carried away by a pack of coyotes. He found the pack, but the somber discovery of his pet’s remains nearby suddenly turned to fascination, and he began to seek out packs around the island to photograph.

Upon examining the photos, he noticed that the animals had significantly different features than a standard coyote—namely longer legs and longer noses. Wooten became convinced they were at least some sort of red wolf hybrid, if not entirely red wolves. He was able to locate two deceased coyotes on the side of the road and took skin samples and stored them in his freezer in the event that he found an interested scientist.

He tried for years to prompt the curiosity of the scientific community. Unfortunately, everyone he contacted was either interested but not enough to pursue it or married to the “scientific fact” that red wolves were extinct and dismissed him altogether. Finally in 2016, an evolutionary biologist at Princeton University named Bridgett vonHoldt discovered Ron’s photos. 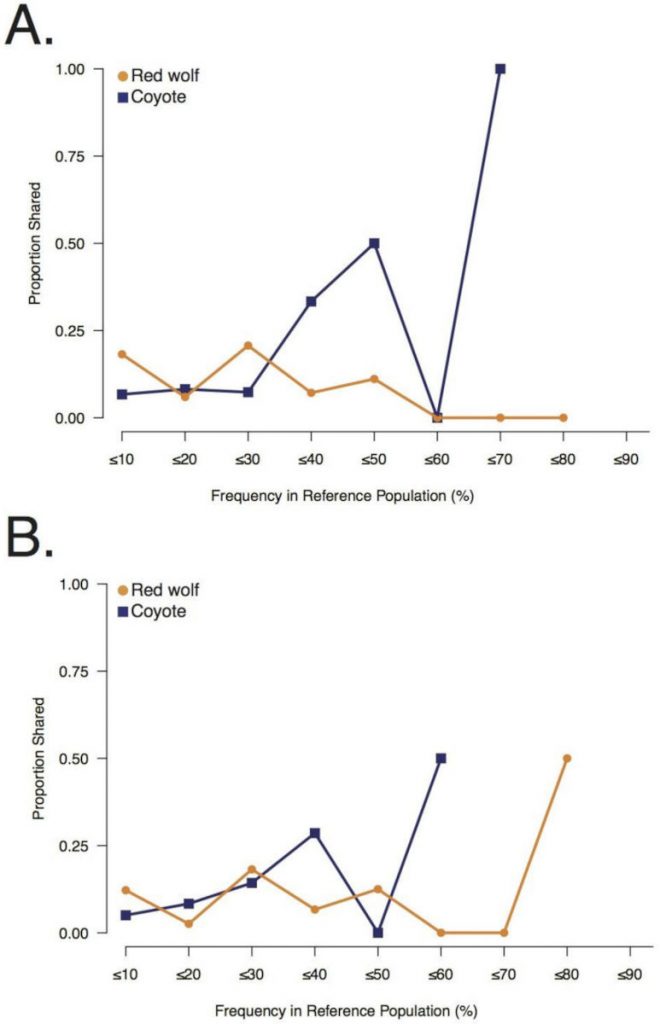 For whatever reason, the photos struck a chord with vonHoldt just as they had with Wooten. She extracted DNA from his frozen samples and compared the profile to coyotes and several different wolf species. An alarming 30% of the Galveston coyote’s genes were determined to be descendant from wolves.

What is more, some of the variants (alleles) in the local canid’s genetic code were also previously thought to be entirely extinct; they are not present in any other known North American species, including the contemporary red wolves in South Carolina. The conclusion then was that this “phantom variation” was passed on by wild red wolves that roamed the area prior to the USFW campaign in the early 70s, or perhaps from a select few that managed to evade capture during that time. 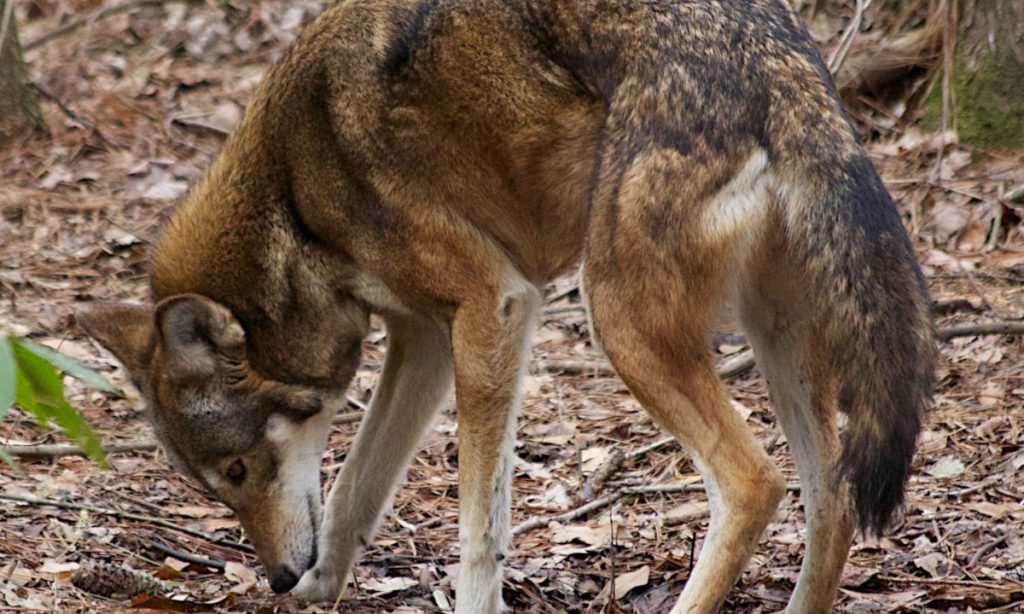 Interestingly, the same year that vonHoldt and her team published their findings in 2018, new studies located a similar red wolf DNA connection in the coyotes of Louisiana. Together, these discoveries are forging new opportunities for the stabilization of the species, from the possibility of breeding red wolves with these hybrids in captivity, to using gene therapy to reintroduce the phantom alleles into red wolves, or possibly even releasing captive-bred animals into areas where the hybrids live.

Future studies are planned to determine how exactly the distinct alleles survived within this isolated population of Galveston coyotes that is located of all places, within the city limits of a popular resort destination. Theories include the fact that they are on an island, which certainly makes sense. But in a resounding testament to Galveston culture which is largely respectful of local wildlife, the New York Times shares another contributing factor to the survival of these animals: the “lack of persecution,” adding, “there is considerable community support for the canines.”

Visitors and new residents of Galveston Island will be encouraged to know that despite the burgeoning population of coyotes here, human-coyote encounters and especially attacks are incredibly rare. Coyotes are nocturnal and rarely move about in the daytime hours. In Galveston, they are generally the most active just before sunrise. They can, however, mistake small pets for prey and may possibly attack a large dog if it is viewed as a threat to their territory or habitats.

Only three simple steps are recommended to minimize interaction.

Other than these recommendations, the only other thing to remember is—if you see a coyote, leave it alone. Unless of course you just want to stare at it in awe for a brief moment from a safe distance. Please do not feed, haze, attack, or otherwise provoke or harm these creatures, and if you happen to get a great photo of one and post it on social media, do not post its location even if it is a local Galveston group.